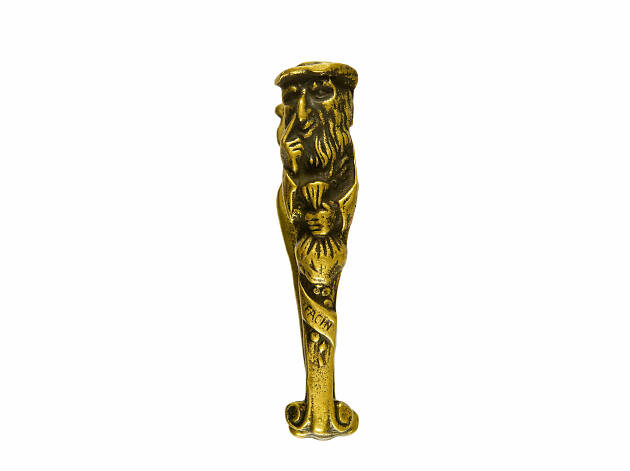 Jews, Money, Myth, a major new exhibition at Jewish Museum London, explores the role of money in Jewish life and its often vexed place in relations between Jews and non-Jews, from the time of Jesus to the 21st century. It examines the origins of some of the longest running and deeply entrenched antisemitic stereotypes: the theological roots of the association of Jews with money; the myths and reality of the medieval Jewish moneylender; and the place of Jews – real and imagined – in commerce, capitalism and finance up to the present day.

This cutting-edge exhibition reflects on over 2,000 years of history, drawing together manuscripts, prints, Jewish ritual and ceremonial objects, art, film, literature and cultural ephemera, from board games and cartoons to costumes and figurines. Exhibits from the museum’s collection are complemented by loans from Europe, North America and Israel.

A highlight of the exhibition is Rembrandt van Rijn’s painting, Judas Returning the Thirty Pieces of Silver, 1629, an early yet artistically mature work from a private collection that is rarely seen in the UK. Contemporary and newly commissioned artworks, including an archive-based video piece by Jeremy Deller, reflect on the exhibition themes.

Abigail where did inspiration for this exhibition come from?

I started thinking about this exhibition about five years ago.  As with ‘Blood’ our exhibition in 2015, I felt it was vital that the Museum is a space that can tackle some of the trickier and more sensitive issues that surround Jewish life and perceptions of Jews, by offering context and the long view.

What is the main message behind the exhibition?

Myths and stereotypes have origins, and this exhibitions brings together objects from over 2000 years of history to examine these origins.  It is vital that we challenge ourselves and understand how these myths and stereotypes came to be in order to fight hatred and ignorance today.

Who are the key players behind the project?

All of the team at the Jewish Museum and our guest curator Joanne Rosenthal have helped to create this exhibition, and for the second time we have partnered with the Pears Institute for the Study of Antisemitism, who worked with us on Blood (2015).  They have also helped to put together the accompanying book of essays.

What factors did you have to take into consideration in preparing the show?

There were many factors that we had to consider. For example,  would people think we were reinforcing anti-Semitic stereotypes by showing this material? How do we sensitively display material that is so grotesquely antisemitic?  How would both our Jewish and non-Jewish audiences respond to seeing such material? We discussed these with our colleagues at the Pears Institute, and ran focus groups.  To illustrate the difficult discussions involved in working this subject, we’ve also included an ‘Alternative commentary’ in the exhibition that gives an insight into some of the discussions that the curator Joanne Rosenthal and I had about how to display and talk about objects, it’s a new approach but one that visitors have responded to well.

What are your favourite elements of the exhibition?

We have a wonderful Rembrandt on loan from a private collection, Judas Returning the Thirty Pieces of Silver (1629), thought to be his first masterpiece and rarely seen in public.  It is a wonderful piece as Rembrandt’s view of Judas as a complex man with a troubled conscience, unsuccessfully attempting to return his money, contrasts with earlier depictions that show the moment when he takes the coins. Thanks to support from Art Fund, we also have two brilliant newly commissioned works by contemporary artists Jeremy Deller and Doug Fishbone that respond to the themes of the exhibition.

We’re living in increasingly unsettled times; what is the museum’s priority in creating greater awareness of issues facing the Jewish community?

The Museum’s priority is to offer the public a place where they can confidently and calmly explore the history of Jews in Britain, and join our discussions. Jewish traditions encourages learning through questions, which is why we approach difficult subjects with no easy answers in order to fight hatred and ignorance and build bridges.

Why should people come and see this exhibition?

At a time when antisemitism is on the rise and rarely out of the news, it is vital that people understand where dangerous stereotypes and tropes originate and how they have developed over time. Jews, Money, Myth offers audiences a safe space to understand better the history of myths that link Jews and money.

A major exhibition at the Jewish Museum London