(above: Perched II by Jamil Naqsh oil on canvas)

Artist Jamil Naqsh’s work often reflects, not just the culture of Pakistan, but also that of the whole Indian subcontinent, both Muslim and non-Muslim. His ability to echo and develop a fruitful relationship with Western Modernism without unlinking himself from the the wider global community has allowed him to become of of the best known contemporary artists of Pakistan.

His latest body of work seeks an elaboration of a private mythology – but a mythology that is, nevertheless, deeply rooted in the culture the artist belongs to. This mythology is, above all else, romantic. “The Muse, Messengers & Minatures” stands in at a retrospective exodus to both the Indian subcontinent’s princely past and to the tradition of courtly love that flourished through chivalry.

The protagonists within this series reveal themselves as a marvel of beauties who find themselves secluded, with their only point of contact reserved for a handful of birds which are seen singly or in small flocks. as these pigeons bring them messages from the outside world – a place which remains unseen, viewers are left feeling restrained, unfulfilled and longing for more. As asserted by art critic Edward Lucie-Smith, the Indian arts are a paean to the beauty and fertility of the natural world – a must see body of work for all who wished to be marvelled.

(above, Origin I by Jason Brooks, acrylic on canvas)

Jason Brooks refers to Courbet’s ‘The Origins of the World’ (1866) in the making of his latest series of work putting into practice the desire to repaint and rework painting.Seven apparently abstract paintings reveal an unexpectedly tactile experience of viewing paint. The works, each identical in size and orientation, differ in their individual spectrums of strong, sometimes garish, colours that swirl, overlap and accumulate in the creation of a new visceral, yet highly analytical, style. Paint drips onto the exposed sides of the canvases, to make transparent the process of rendering faultless illusion, revealing what Michael Bracewell has called ‘the object residue of an addiction to process, in which process conflates desire, satiation, surface, tension, release and texture.’

Brooks’ collaborators provide source material, working with paint in colour and form which are completely outside of the artist’s control. The ‘sitter’ is no longer passively observed, but their body becomes their own canvas, to be repainted and reinterpreted in turn by the artist.

As with the work by Courbet, the field of vision is cropped so that identifying features of each model are not the focal points of the paintings. Brooks then meticulously recreates their blind abstractions in what he has described as the ‘closest he has come to a discussion with abstract art.’

The works invite the viewer to ask whether knowledge of a work’s origin should ever change its meaning and whether a purely aesthetic relationship with the form of art is possible. A central paradox in Brooks’ works – the love of painting and our desire for the materiality of paint – is denied meaning by a technique that itself questions whether process itself should ever be allowed to become the subject of the painting. The paintings open up a dialogue about how illusion in painting is formed and how we as viewers engage with that illusion.

Indeed, the paintings are not abstract at all, as they are complex reworkings of the abstract forms offered to him; realist paintings of abstract sources.

3) It’s The Least I Could Do, Ben Oakley Gallery

Ben Oakley continues to explore the boundaries of all mediums and subject matter in his latest solo exhibition – It’s The Least I Could Do.

As a nod to his signature aesthetic malleability, Oakley’s latest body of work extends to the use of carved wood, to enamel panels, concrete paintings to figurines as well as a wide rage of materials – setting the cue for an insightful, lively visual discussion on his pursuit to articulate and interrogate the world around him through experimentation. Oakley cites intrigue, ingenuity, incite, initiative, inventiveness as key to his work –

“The line up is a balancing act as I draw together random elements to create something inventive and when I think it fits, it’s chosen to sit alongside the other pieces in the show. Most of which are collected over the years with good intention, then come into play almost on a subconscious level – with a strong sense of nostalgia attached.

“Being brought up under an antique dealers market table in the 1970′s, you gain a magpie’s eye for diversity, quality and craftsmanship.

“I enjoy producing work that has layers of intrigue, something that perhaps surprises and pleases the viewer with an added bonus.”

A must see exhibition that evades the boundaries of most preconceived notions behind the purpose of art and creativity.

The exhibition runs until July 5th at Ben Oakley Gallery, 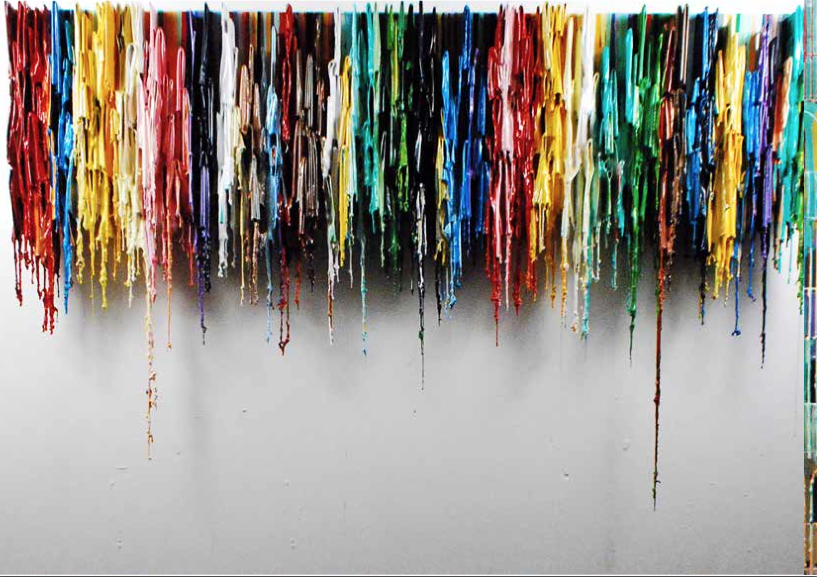 This latest body of artwork from Russell West is a bold and striking collection of works all based around his highly unique dripped-paint process.

“It amuses me to think that at the end of every day, after locking up my studio for the night, my paintings continue to build themselves on their own in the dark in full colour, creating their desire lines”

West’s artwork is unrivalled in its style, the solid panes of colour representing walls, signage, apartment blocks, buildings, or favelas are all created using just paint in a technique which only West has mastered. The exhibition title ‘Wonderful World’ was inspired by West¹s 6 year old daughter who continually experiences our world with fascination, joy and wonder.

(above, still image from Parametronomicon)

Finnish art-duo Pink Twins (Juha and Vesa Vehvilainen) have created a unique synaesthetic experience that traverses the the dimensions of space and time in their newest in immersive installation: PARAMETRONOMICON. With their abstractive video, maximalist sound installations and their digitally developed imagery comprised of abstractive forms and bright colours in perennial motion – we are given compositions of particles that turn into forms which remain in a continuous process of deconstruction and reconstruction – creating chaotic spaces that challenge the human perception.

Presented by fine arts consultancy agency ARTinTRA, curated by Vassiliki Tzanakou, the installation seeks home in the evocative Chapel of the House of St Barnabas. The constructed forms of PARAMETRONOMICON, both organic and mechanical, are like cybernetic organisms in a process of perpetual adaptation ruled by multiple, continuously changing set of parameters. These forms lead to a chaotic parametrisation where no single truth exists.

Based upon Epistemological theories, PARAMETRONOMICON, resembles a science fiction film which aims to stimulate an immersive visual and psychological experience of perception, cognition and imagination, engaging the public in a diverse dialogue which challenges axioms and belief systems.

The installation will remain on site at the House of St Barnabas in Soho until June 26th.