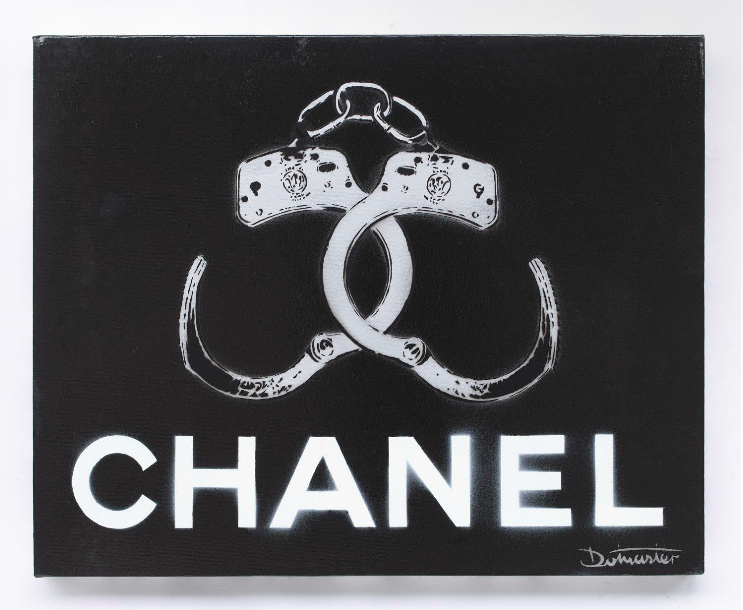 Artist Dotmaster’s fixation with garbage undertakes new heights as he trashes a £20K suite at The Exhibitionist Hotel this month. Whether works of art like these function as a response, critique or example of modern living and the changes involved, there is without a doubt a link to the experience of mass culture and the conditions of perspective on luxury.

After Nyne’s Arts Editor Luciana Garbarni spoke with the artist in the lead up to the exhibition this evening.

Hi Dotmaster. It’s so great to have you on After Nyne. I’m curious about the genesis behind the name, where did “Dotmaster” stem from?

It was a project name 10 odd years ago. Some friends The Graffiti Research Laboratory were doing a residency in Ibeam a new media institute  in Nyc . There they had  a laser cutter and invited me to come and play on it. I thought i would try and cut something that i couldn’t by hand . I have always been obsessed with half tone so i thought id see if cutting it as a stencil would work. I chose an iconic image to test it out, the Mona Lisa… after a few days drawing thousands of dots I had a stencil I could use but it was just someone elses art, the problem was how to make it my own.

So the dotmasters project was born. I made several half tone stencils of old masters and started spraying them on the fronts of galleries, questioning their appreciation of art and how they would react to this act of vandalism.

As I traveled I would hit up the galleries in town and send them a questionnaire asking them their reaction. Previously I’d been working under the name C6.. www.c6.org but Dotmasters stuck and even though I rarely use half tone now the name remains .

Have the streets always been your “canvas” of choice?

I have always painted on the street. But I have been a performance artist. A new media artist and a painter . I like to invade space i suppose, but the medium changes with the message.

What usually appeals to you about the walls, alleyways or buildings you decide to work on? How do you decide where to leave your mark?

Thats a  hard one to answer. Certain images lend themselves to certain spots. Placement is king. When you get it right the piece stays for a long time. Get it wrong and the thing gets buffed out the next day. I painted a piece in cork st mews W1 london about 10 years ago. Its a half tone adam and god from the sistene chapel. With all the galleries around the cork street area it was the right image in the right place and it’s still there today

Do you think people are intimidated by art?

Less and less I think a theres an artform for every taste these days. The internets full of images. You no longer have to buy the right books and go to the galleries you can browse a huge amount of art online. I am not saying these photos are as good as seeing something in the flesh but you can certainly trawl a lot of content that will educate and allow you to choose what you actually go and see

Your work typically breaks the boundaries on the consensus of “beauty” and “art.” Tell me a little about your fixation with rubbish, trash, garbage.

There’s a global discussion about our trash. What we do with it. How to recycle it etc.  It’s in the headlines its on our streets. We all contribute, most peoples only contribution to the look of their area happens once a week when they put out their trash. I wanted to paint something that played with that idea. Over the years, I’ve seen urban art transform run down areas, they are poor areas and cheap, the artists move in, the atmosphere of the area changes. Then the developers move in, prices go up and the artists have to move out. I thought the trash might have the opposite effect.

What was the first thing you did when you stepped foot in the Hotel Suite where “Trash City” is currently being exhibited?

I tagged behind the headboard of the bed. Some elements in the room. The cushions and trash city sign were very complicated these were started as soon as it was agreed I was to do the room. Meno.tv helped with the signs electrical elements and Paulenes curtain designs made the cushions . There’s been a real trash city team working away on this for months

Do you have a personal philosophy on how art should be displayed?

Not really,  art’s a varied beast and to have a fixed process and outlook on its display would limit the possibilities. Each message has a medium that works best with it. Whether i am swinging a hammer on my high strikers at Glastonbury festival in the unfairground, or painting up an alley way in shoreditch its probably only my turn of phrase that makes the connection between them. That and my weird sense of humour.

Dotmatster’s “Trash City” installation will be at The Exhibitionsit Hotel from the 13th May until August- the suite is available for guest bookings at the price of £750 per night.

Limited edition pieces from “Trash City” by Dotmasters including luxury bin-bag cushions will be available for purchase.