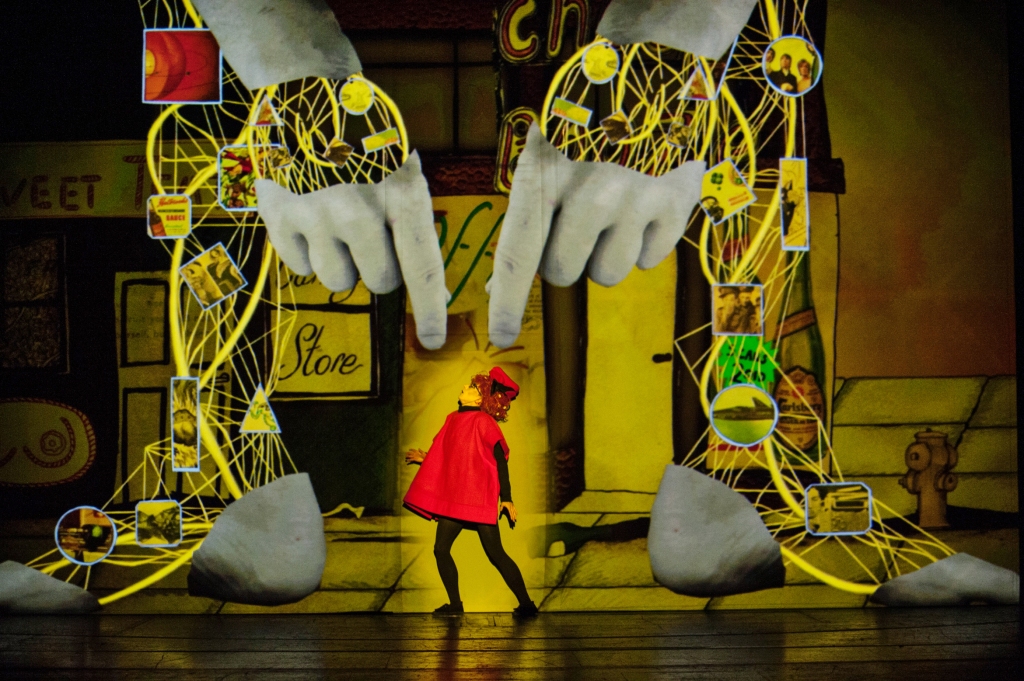 After a critically acclaimed run at the Young Vic, award-winning theatre company 1927 brings Golem to Trafalgar Studios for a limited run, April 14th to May 22nd, before embarking on an international tour.

In a satirical assessment of modern technological dependence, Golem follows the life of Robert Robertson after he purchases a golem – a creature that will improve the efficiency of his daily affairs. But Robert Robertson’s decision to upgrade his golem to the newer model proves to have disastrous consequences.

After Nyne spoke to 1927 associate artistic director and performer, Esme Appleton, to find out more.

Golem looks at what happens when man loses control of machine, but what part of your job would you get a machine to do for you if you could?
It would be amazing to have someone to set the show up for us, this normally takes roughly two days. They’d put the screen up, focus the projectors, place all the spikes on the floor (little pieces of glow tape which the actors use to stand in the correct position to interact with the animation). Each job can take longer than expected and can be quite nerve wracking. It is all part of being in a devised theatre company …. But if a golem was there to do it, I wouldn’t stop them!

The character of Golem is in mythology often made of clay, what material would you be made of if you had the choice and why?
Clay is pretty great because you can change shape all the time… but our Golem didn’t like the heat so would often start melting, mid animation, if he had been out of the fridge for too long; so that wouldn’t be that practical for me. I’d go with Paper- then I could fly. I might need a bit of wind to aid me … but I reckon on a windy day you could get pretty far!!

The character of Golem is based on a Jewish myth. How important is it in contemporary society to tell stories built on religious mythology?
I think any mythology is great… religious, urban, and historical. It is a reflection of the society of the time it was created, people trying to make sense of the world around them and the fears and hopes of mankind.

The show has been put on in London and Vienna. What have been the differences in the audience’s reaction to the show in the different countries?
We have been to Taiwan and Austria and London. When we perform internationally, we have subtitles so often laughs come at strange times as the audience are reading them either ahead or slightly behind when we’re saying it. We have a few very specific references from English culture so a few of those are lost in translation but the over-riding theme of the growth of our dependence on technology is surprisingly universal.

Do you believe that the creative arts industry does enough to engage people who don’t live in the larger population hubs? For example, could you envisage Golem playing to audiences in Grimsby?
I’m from Middlesbrough originally and when I was growing up there was very little going on there, you had to travel to the larger cities to see theatre and you didn’t get to do that very often. So when we play smaller towns, I love it. As 1927, we also factor developing our show in both London and regionally – so with Golem there was some really important residencies where we developed and share the evolving show with local audiences – regionally in Harrogate and Hove but also outside of central London in Stratford working with local communities.

1927 specialises in using mixed media, what does that add to the audience’s engagement in the performance compared to more traditional theatre?
Our show is very much part theatre, part film so I think that the audience feel equally like they are watching theatre, and going to the cinema. We rehearse with film and music from the beginning of the process so it is fully integrated into the performance. I’ve heard people say it’s like entering another world when they come to see our show, I like that idea.

What was your first role in theatre and if you could start all over again, what other role within theatre would you like to master?
In 1927, my first role was as an actress but as we’ve evolved over the years, that role has grown and changed. I had to teach myself to sew for the last few 1927 shows because we needed a screen to project onto and costumes. Suzanne (the Director) and I have always directed each other, so although I wouldn’t call myself a theatre director I enjoy directing acting. That’s what I love about devised theatre, no one has just one role. 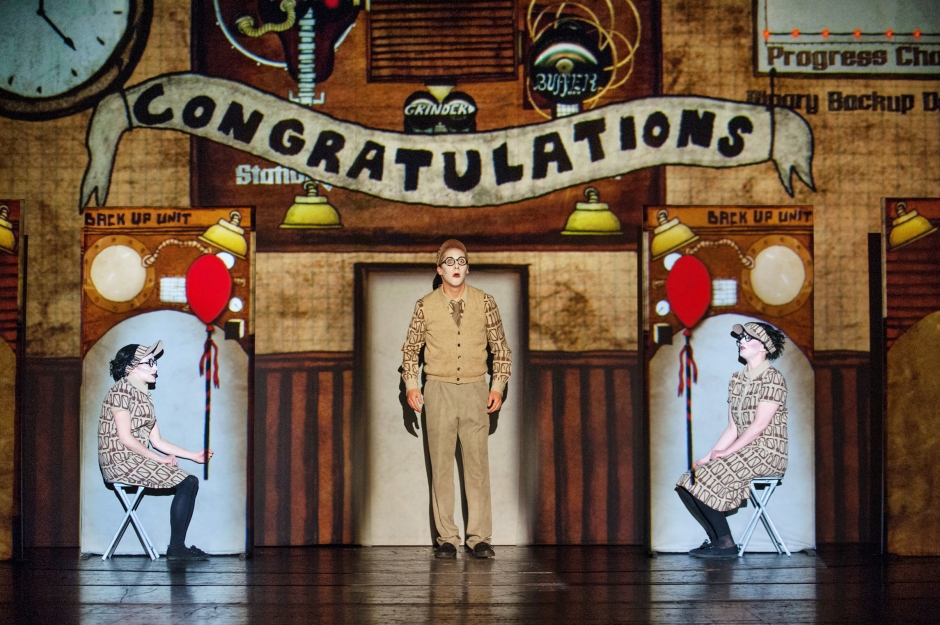 Can you tell us a bit more about what your role as associate artistic director at 1927 entails?
My role is focussed on development of visual ideas, aesthetic and performance style for 1927 shows.

What is the story that you, as part of 1927 or as an individual creative, want the opportunity to tell?
I find it most interesting to raise questions. Taking problems which are affecting us in society at this moment in time but placing it in another, theatrical, timeless world. Although we, as a company, aren’t saying we have the answers to these questions. It’s nice to hear audiences discussing these problems after the show; I heard an audience member coming out of the show the other day explaining anarchy to her children and I thought ‘that’s why we do this!’

With cuts to the arts, do you feel confident that the next generation of theatre innovators will be able to find their way to the stage?
I think there will always be people making theatre whether they have the backing of the government or not. Although, saying that, I think the platforms for that art to be shown is an important factor; places like BAC and Bethnal Green Working men’s Club. Cheap rehearsal spaces would also help a lot of people too.

Neither major political party seems to have stuck its flag to the arts pole, so with the exception of increased spending, what could the next government do to support and potentially reenergise the arts?

Focusing the money on smaller companies and giving less to the larger institutions. Reducing train ticket prices so people can travel nationally and see theatre everywhere!