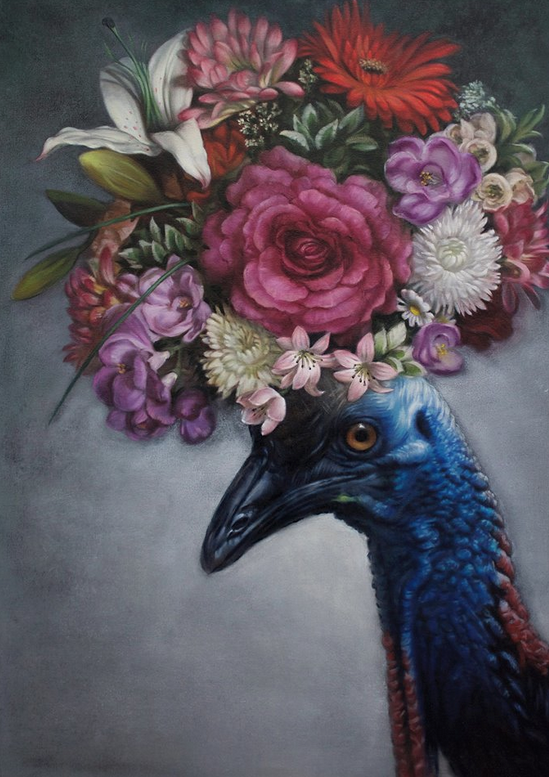 After Nyne were thrilled to spend ten minutes with artist Angela Lizon ahead of her solo show at Gallery 8 in London.

Lizon lives in Bristol, where she works from a studio in Spike Island’s Artists’ Studio complex. After studying Fine Art in Bristol, Lizon went on to study at post-graduate level at the Krakow Academy of Fine Art in Poland.

She has, in recent years, been selected to exhibit at the prestigious John Moores Painting Prize in Liverpool, the Summer Exhibition at the Royal Academy in London and the Threadneedle Prize in London. She has exhibited her work internationally in Melbourne, Brussels, Hong Kong and New York.

Angela you’re currently preparing for a solo show at Gallery 8 – how are preparations going?

The work is done, the show is up. Everything is running scarily smoothly!

In your work, kitsch and the subversive meet…what comes first..the love of kitsch or the love of subversion?

You’ve talked about the journey from treasure to trash fascinating you…can you elaborate on this?

Sometimes when I find an old ornament I wonder about its journey. Who made it and for whom and did the creator believe in its artistic value? Who originally bought it? Who threw it out to be finally valued for so little? A history of taste is contained within an ornament.

Can you tell us a little about your method of working…from start to finish?

I work predominantly from photos – my own, found or bought. Sometimes the idea comes first, sometimes the photo sparks the idea.

Then I collage and manipulate the images on the computer. Finally I square up the image (in the old fashioned way) and paint the image in oils on canvas.

Is your eagerness to engage with the past a sign of hankering after a ‘golden era’ or do you favour the modern?

I don’t hanker for the past but I like the mystery of old anonymous photographs – who were the people and what were their lives like? Old photos are more likely to be damaged or badly preserved, adding to their mystery.

Who are your own artistic icons?

Rothko and Richter amongst many.

What would you like a spectator to take away from the show?

Enjoyment and a different perspective on items and subjects that are often neglected or overlooked especially in the fine art world.

Finally, what’s next for you?

A rest and a deep clean for my house which hasn’t seen a hoover or cleaning implement for several months.