Having been long considered one of Germany’s most important and influential contemporary artists, Isa Genzken turns her easel along with a new series of paintings to be unveiled at Hauser & Wirth London, employing motifs from the language of capitalism to explore themes of self- and social-examination. Since the 1970s, Genzken’s diverse practice has encompassed sculpture, photography, found-object installation, drawing and painting.  Her work borrows from the aesthetics of Minimalism, punk culture and assemblage art to confront the conditions of human experience in contemporary society and the uneasy social climate of capitalism. Although her approach varies greatly, Genzken has maintained a striking common thread and internal truth to both her vision and her works of art themselves. 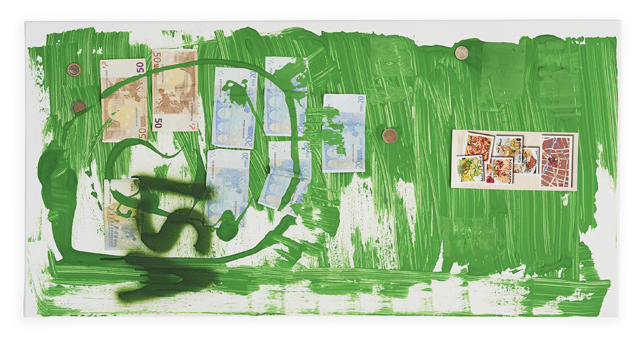 In the Geldbilder works, Genzken takes money as a painterly medium itself, affixing notes and coins of various currencies and denominations to the canvas. She uses the very tools of a profit-driven society in her most direct and literal engagement with its principles. Genzken disassociates money from its role as currency, and encourages an appreciation of it as a material object, as a social artefact, and for its symbolic connotations. Genzken plays on the concept of art as investment, with the suggestion that these notes and coins might be removed and re-used in times of hardship. The paintings physically ‘hold’ capital, acting as stable assets even in the most volatile market.

These poetic and chaotic paintings make explicit reference to the monetary value of art, and the systems that underpin society at large. Genzken has also incorporated money into her earlier, more abstract paintings of the 1990s, in which she laid coins onto a canvas and coated the surface with lacquer, before removing them to reveal only the imprint of the coins’ shape left behind. The new series possesses a raw, aggressive energy. Genzken has roughly covered each canvas in a combination of vivid, unmixed colours, using either a large-bristle brush or spray can, sometimes dripping the paint in thick, random gestures, with the impressions of the canvas’ supports and areas of unmarked surface still visible. The coins and notes are applied in seemingly random patterns; stacked, grouped to create shapes or arranged in lines traversing the surface of the painting.

The Geldbilder paintings include found objects reappropriated for artistic use. An anthropologist of her own environment, Genzken incorporates aspects of her immediate surroundings into the artworks as a contextual reference point, including promotional leaflets for products and services in Berlin, where she lives and works. In the manner of Robert Rauschenberg’s Combines, small plastic animals are glued to a painting’s surface, or a feather, fabric pouch or wooden ruler in the shape of a toy gun are suspended from the bottom of the canvases. With the inclusion of these ubiquitous objects the works come to resemble tableaux of contemporary society.

The Geldbilder paintings are contextualised within the exhibition by earlier examples of Genzken’s work, including a group of concrete sculptures from the early 1980s.

“Gedlbilder” opens tonight from 6pm until 8pm. The exhibition will run through to 16 May 2015 at Hauser & Wirth London
23 Savile Row
London W1S 2ET